This article describes the technical design of the AppFlowy Editor.

AppFlowy is an open-source alternative to Notion built with Rust and Flutter.

An editor is a core component in AppFlowy. In many scenarios, such as Document, Grid, and Board, the editor component we used till v0.0.5 is unable to support certain business requirements.

We have therefore been seeking an editor that will support all of AppFlowy's use cases and we have concluded that we need to design and develop our own editor for AppFlowy which we will call the AppFlowy Editor.

Before diving into our own editor, we would like to give a special thanks to flutter_quill, its author, and the community. Without you, we wouldn't have made it this far.

Issues with the Editor Component

As mentioned earlier, in the early versions (v0.0.1 to v0.0.5) of AppFlowy, we used flutter_quill as our editor component.

In the process of using this library, we have encountered problems with extensibility, consistency, and code coverage.

Although these problems may be addressed in future versions of flutter_quill, we do not wish to rely on updates to this component in order to move forward with our development.

We have encountered difficulty with quickly extending new components (aka plug-ins) and shortcuts.

When it comes to components, an example issue is our requirement to insert Grid and Board into existing documents. We have defined a data structure for our new AppFlowy Editor that simplifies this process. We only need to define a new node with a new type and define a corresponding NodeWidgetBuilder to render these components in the AppFlowy Editor.

We have been unable to support self-consistent context production processes, such as inserting new components via the slash command or a floating toolbar.

Issues with Code Coverage and Stability

To date, the code coverage of the AppFlowy Editor is stable at 79 to 80%. Meanwhile, we try to make sure to fix known issues and add new test cases to cover them.

We have been actively looking for alternatives in the open-source community, such as super_editor.

During our research, we found that super_editor allows for extending new components in a way that can also support customized shortcuts.

However, the underlying data structure of super_editor is a list that does not support nesting. We feel this data structure is not appropriate for nodes with parent-child relationships. For example, in the case of multi-level lists, the form of each level is inconsistent.

Another important consideration that has factored into our search is our need for an editor that is highly customizable and can keep up with the times such that it can continue to support the evolving functionality of AppFlowy.

To date, we still haven't found a solution that suits our needs.

For the above reasons, we have decided to design and develop the new AppFlowy Editor component ourselves.

We believe that the foundation of the editor lies in the design of the data structure.

Why Use a Combination of Node Tree and Delta?

Why do we use a node tree?

So our preference is to use a node tree like Slate.js to describe the document in chunks, where each chunk’s additions, deletions, and modifications only affect the changes to the current node.

Why do we still use Delta for the text node?

The following JSON will be used to describe the above-combined data structure. 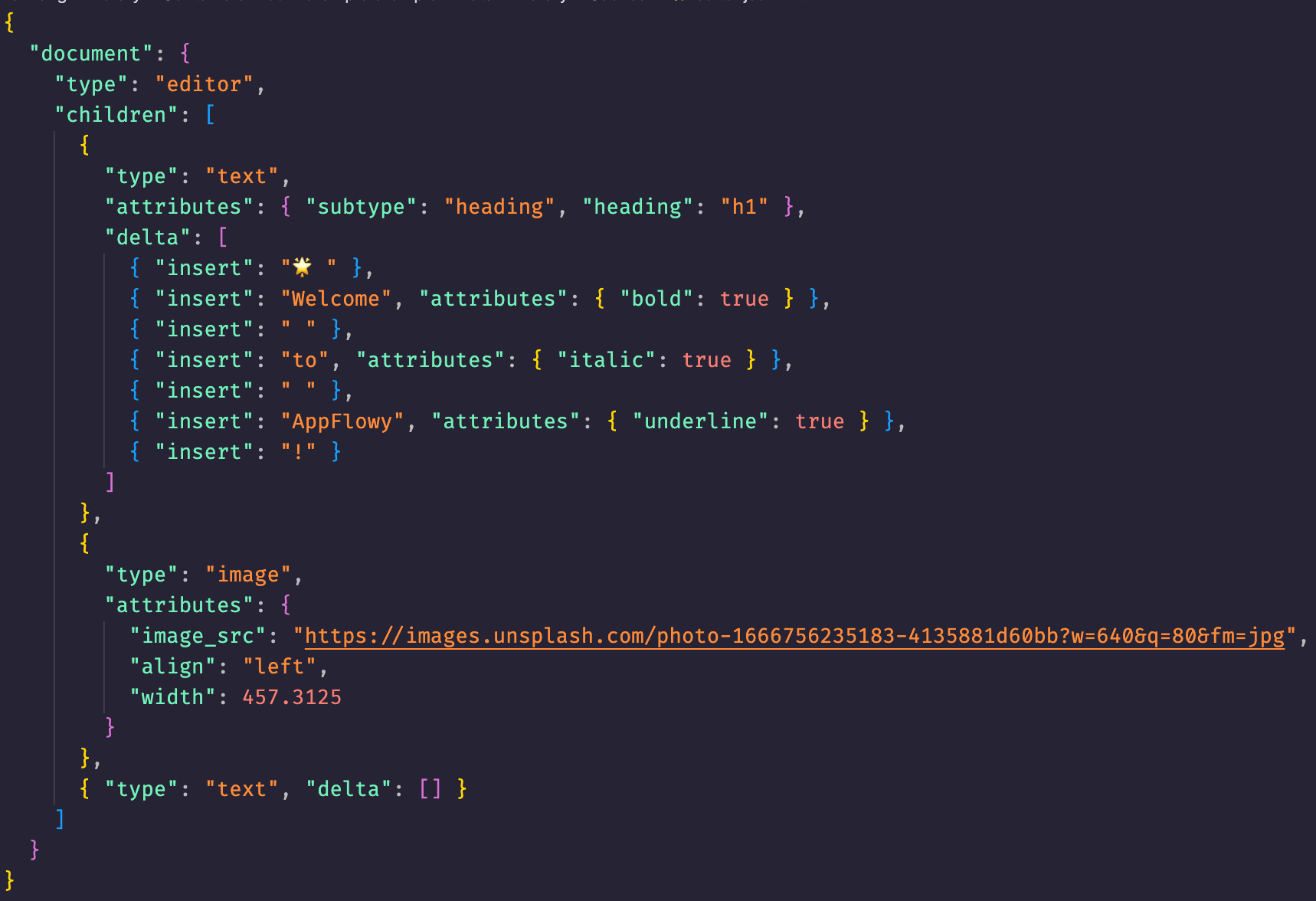 We will state the design of AppFlowy Editor through the following three aspects.

AppFlowy Editor treats a document as a collection of nodes. For example, a paragraph is a TextNode and an image is an ImageNode.

We use LinkedList to organize the relationship between nodes, which provides a relatively efficient way to insert and delete nodes.

Each node uses a normalized description, so we can easily describe those nodes in JSON.

A node must contain the fields listed below.

The Atttributes field indicates what data should be presented and synced. An ImageNode, for example, uses the image_src in its attributes to describe the link where to load the image.

The Children field indicates the children nodes, such as the embedded bulleted list or the block in the table component.

The Delta field will only be used for instances of TextNode.

As mentioned above, AppFlowy Editor will use Delta to describe the information of the text node, which is not repeated here.

It should be noted that certain styles are described using Attributes instead of Delta. Rather than make them a part of the text, we treat these styles are descriptions of paragraphs. These styles include headings, references, lists of text nodes, as well as the overall paragraph style.

Below is the definition of a Node in Dart.

While this is an example definition of a TextNode in Dart.

In the following figure, there is an image node and a text node in the document. 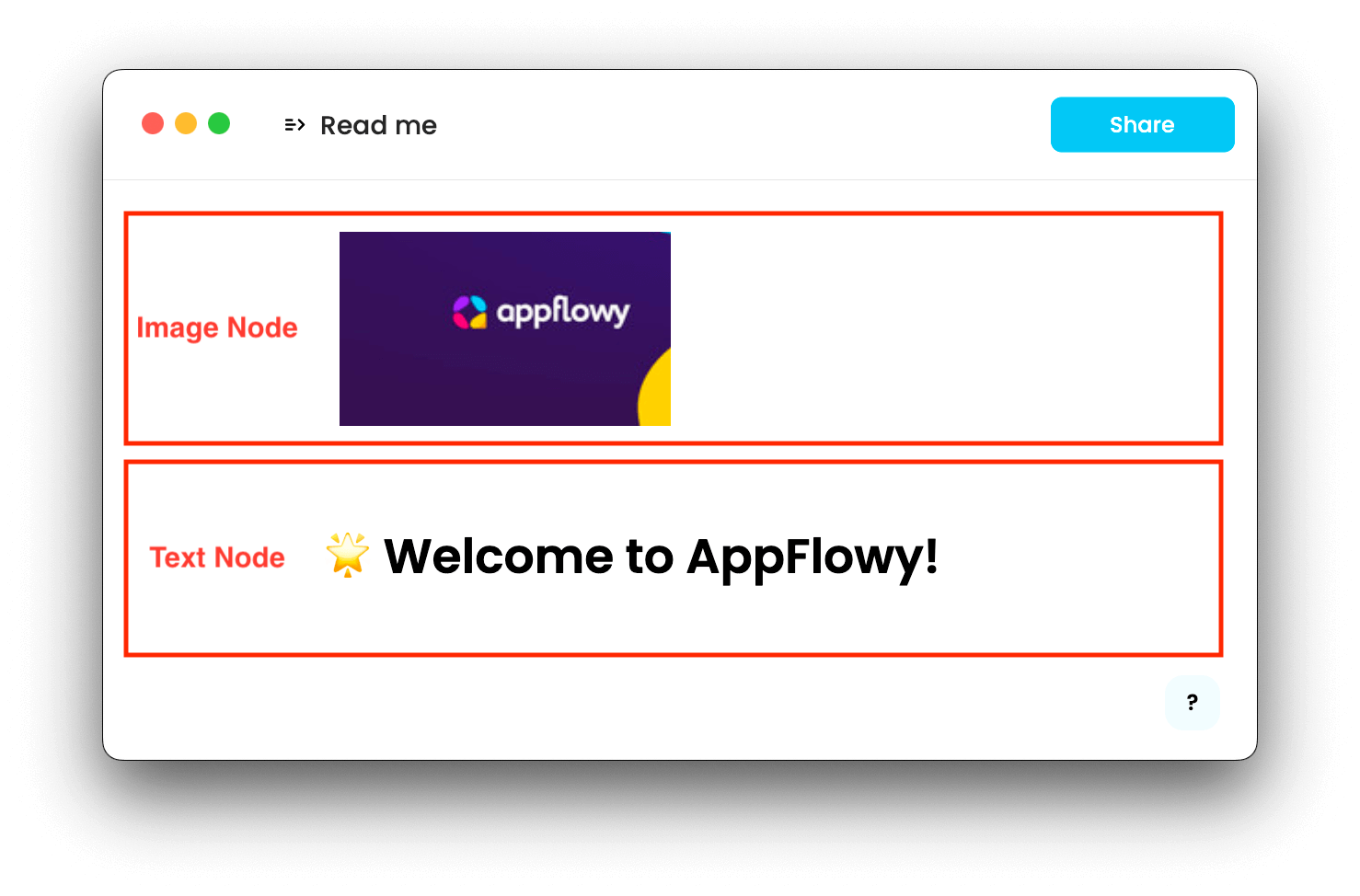 The JSON representation of ImageNode's data is

And the JSON representation of TextNode's data is

In the following figure, you can see an example of an embedded unordered list in the document 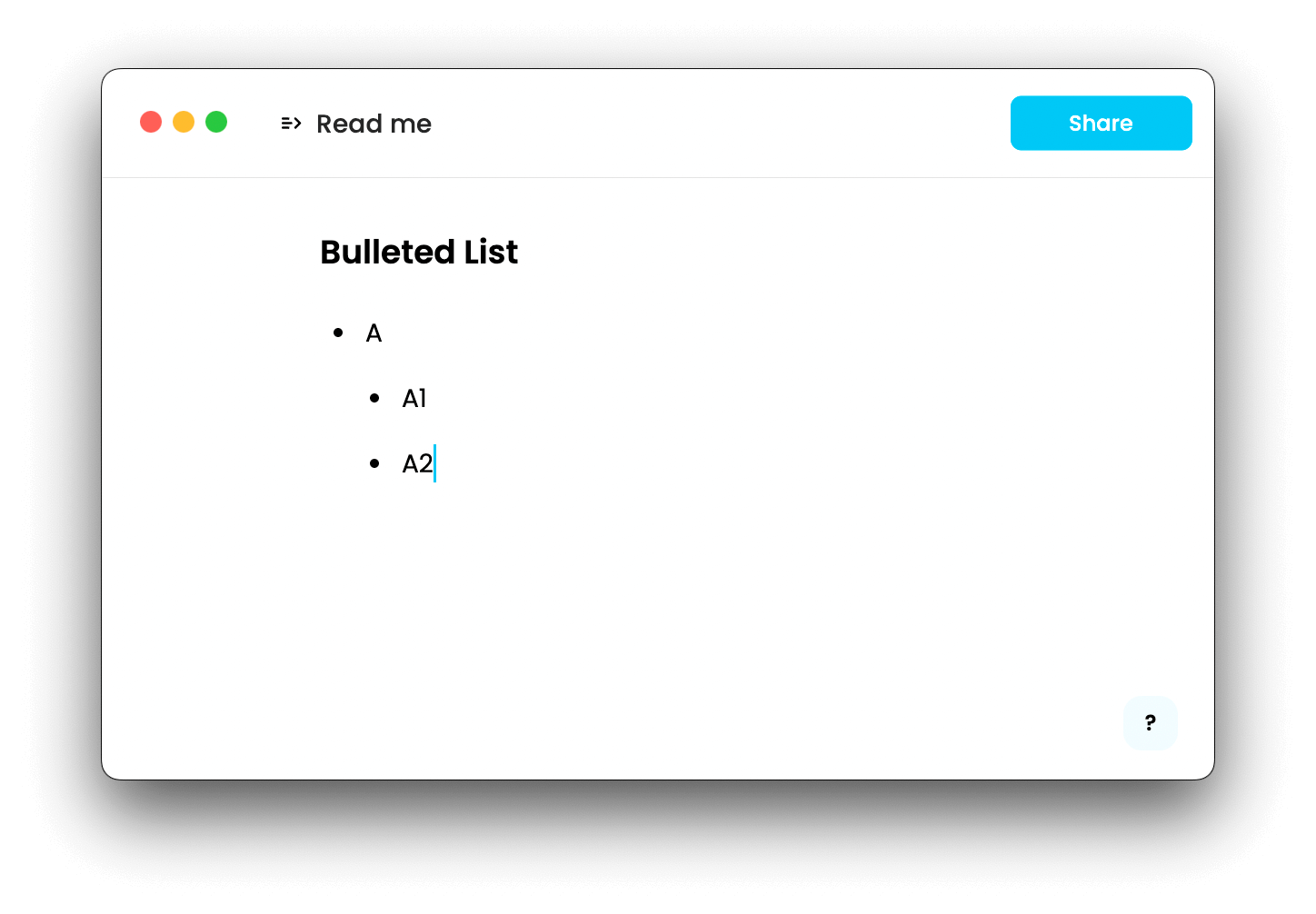 And the JSON representation for the document is

Updating Data in the Editor

Before we update the data, we must know which part of the data needs to be updated. In other words, we need to locate the position of a node.

Nodes may be located in a variety of manners including:

There is an example below. 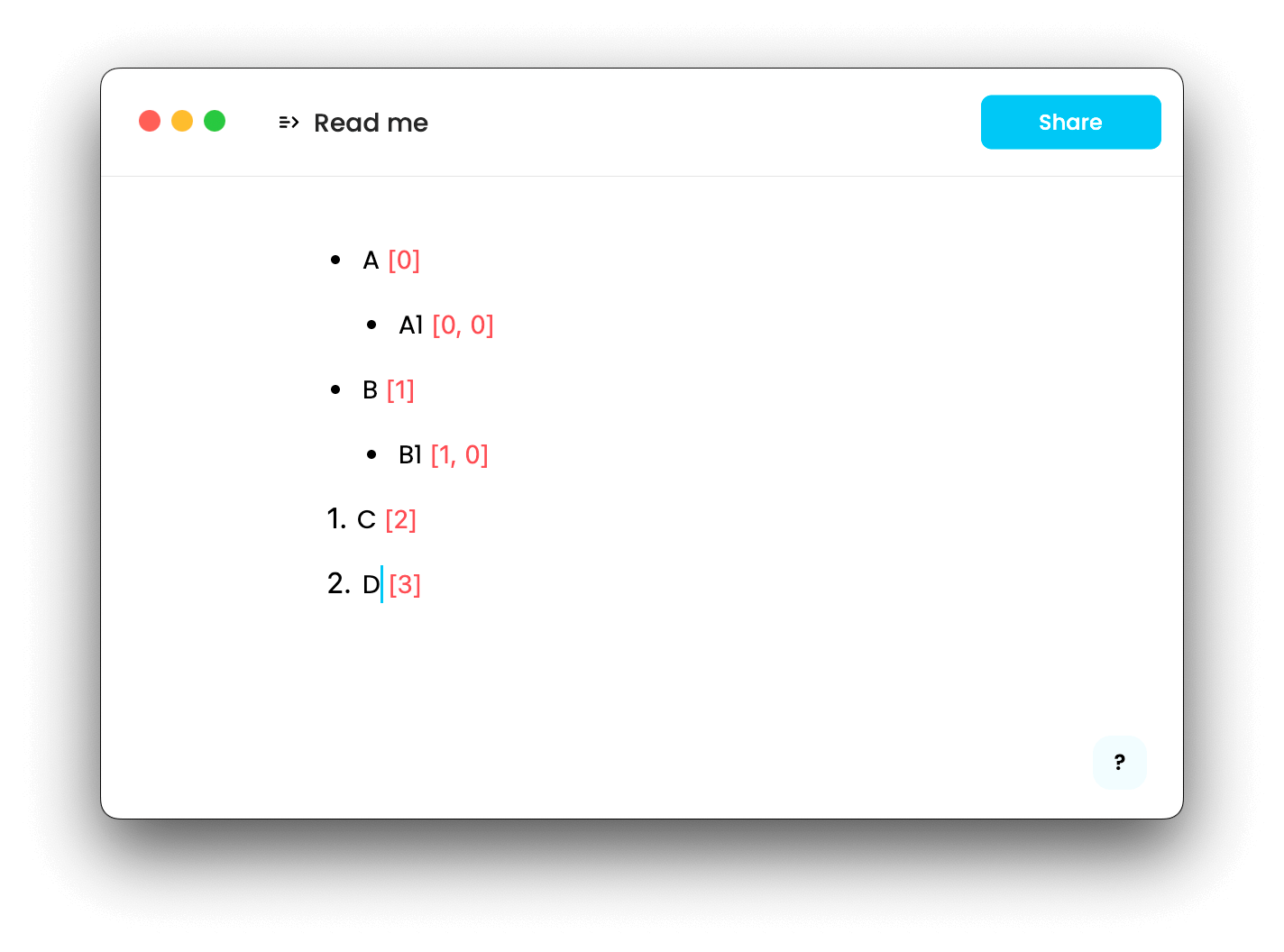 AppFlowy Editor uses position to locate the offset of a node. It consists of a path and an offset.

Position is usually used for text editing and cursor locating. For example, if we need to locate a caret in the middle of A and 1 in node A1, then the Position is

AppFlowy Editor uses Selection to represent the range of the selection.

The cursor is also a special kind of selection, except that start and end coincide. It consists of two Positions.

For example, We need to locate the selection range as shown below. 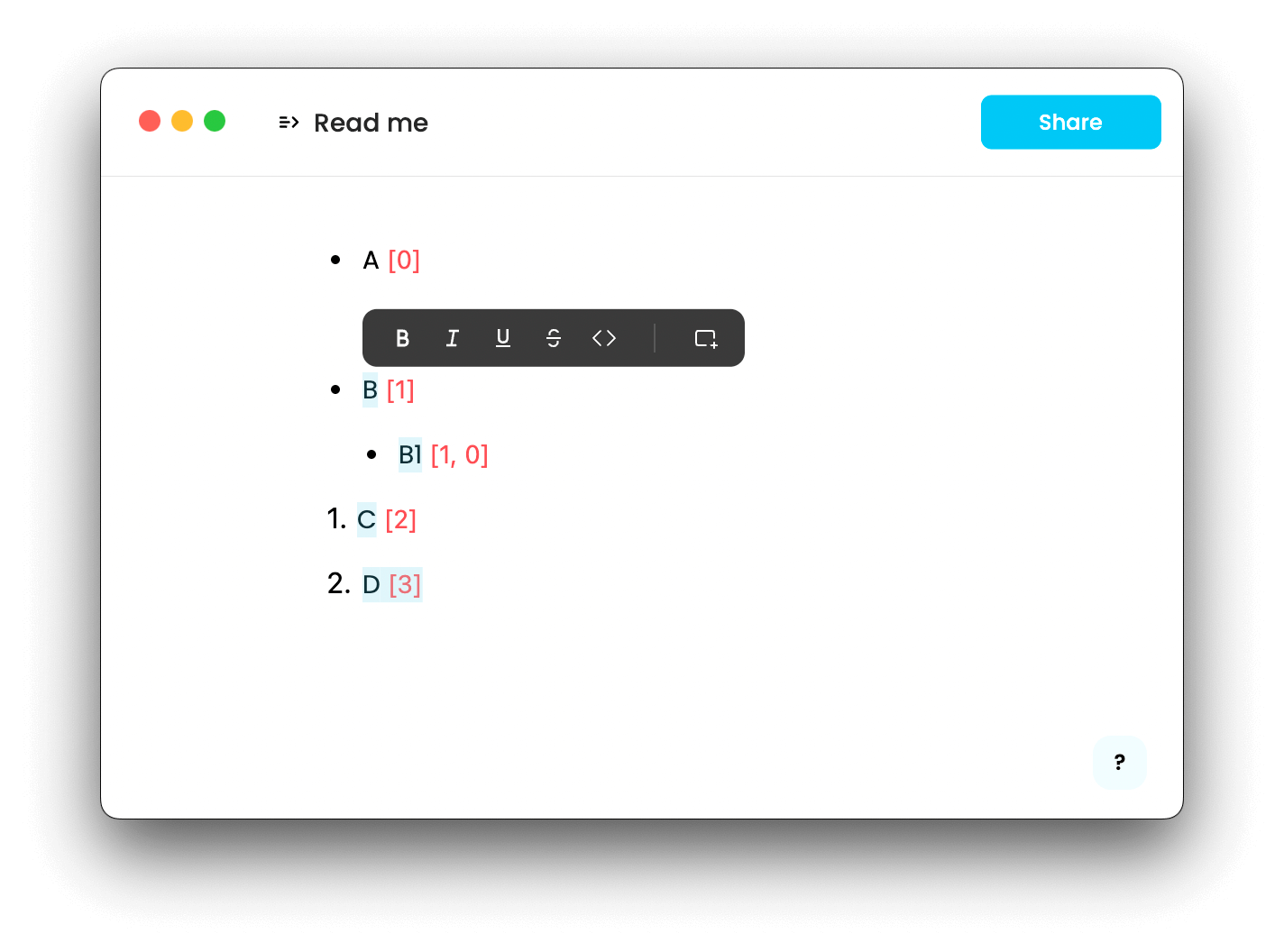 Then the selection is:

Note that selection is directional.

For example, in the case of top-down selection, the selection is

And the down-top selection is

AppFlowy Editor uses Operation objects to manipulate the document data instead of changing the node data directly. All changes to the document are triggered by an Operation.

The operations defined in AppFlowy Editor include

Each operation has a corresponding reverse operation that is applied to undo and redo.

Insert represents inserting a list of nodes into the document at a given path. Its reverse operation is Delete.

Take node A1 in the above figure as an example. Inserting a node with the style Bulleted List under the node A1, then the operation is

Delete represents deleting a list of nodes into the document at a given path. Its reverse operation is Insert.

Take the node D in the above figure as an example. Deleting the node D, then the operation is

In addition, the node data assigned in the delete operation is for the logic of recovery.

Update represents updating a node’s attributes at the given path. Its reverse operation is itself.

Take the node C in the above figure as an example. Converting the type of the node C from a numbered list to a bulleted list, then the operation is

UpdateText represents updating text delta in the text node, which is consistent with the Delta logic.

The AppFlowy Editor uses a Transaction to describe a set of changes to the document which must be treated as atomic. It consists of a collection of Operations and changes to the selection before and after.

The purpose of using transaction is to apply a collection of sequential operations that cannot be split apart. For example, in the following case: 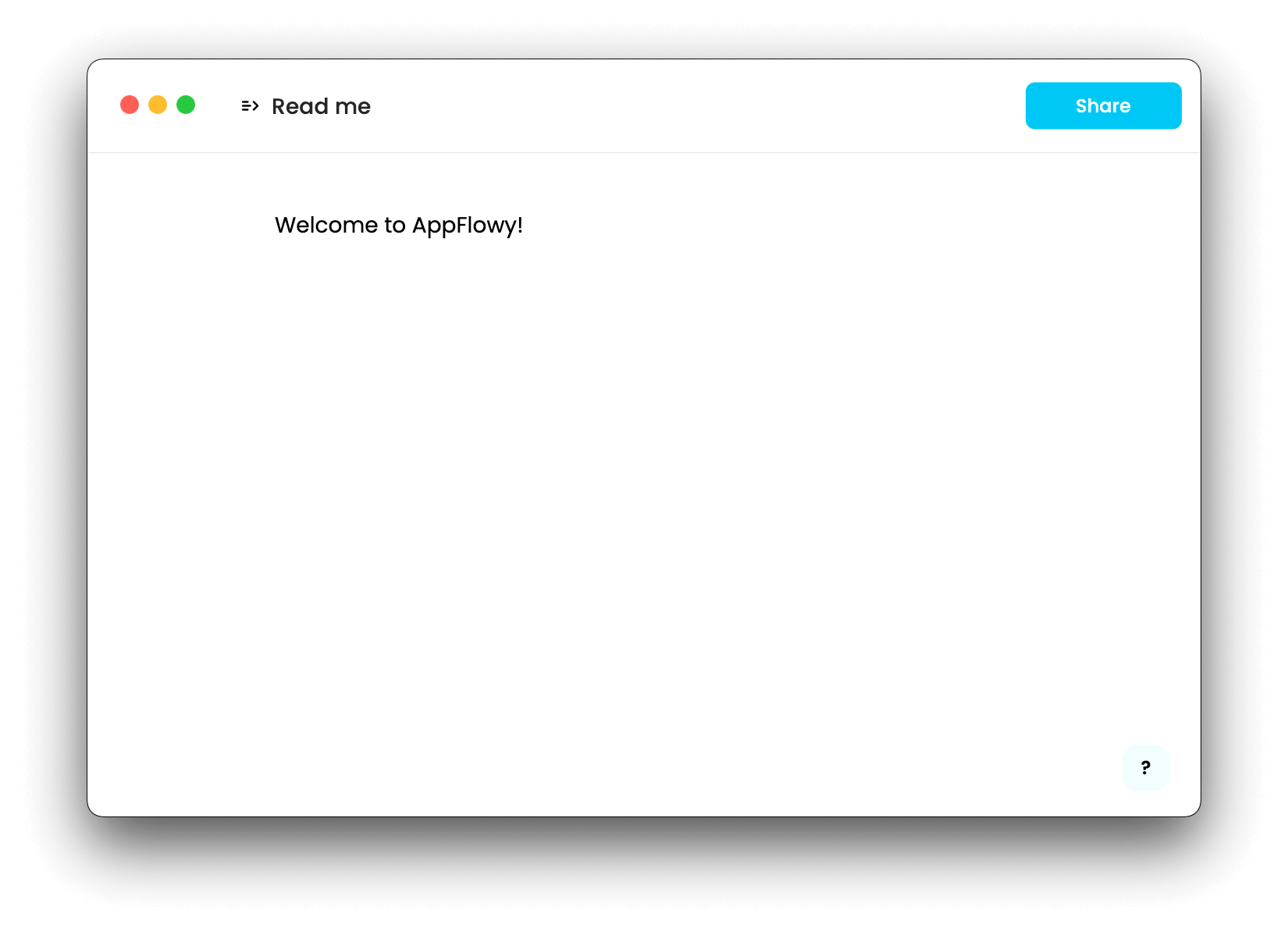 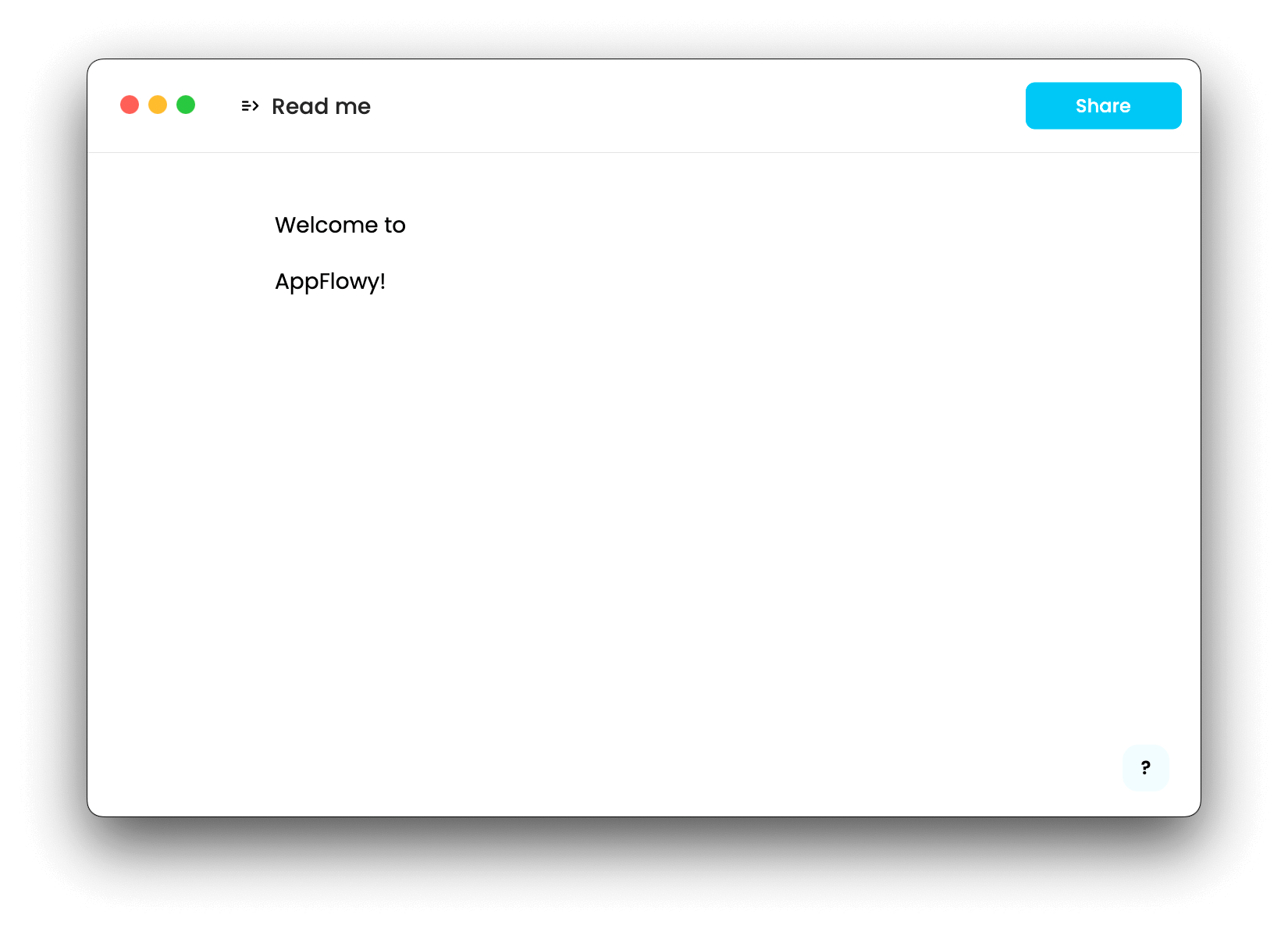 It can be described in JSON

EditorState is responsible for managing the state of the document. It holds the Document, and updates the document data through the apply function given a Transaction.

Summary of How Data Changes 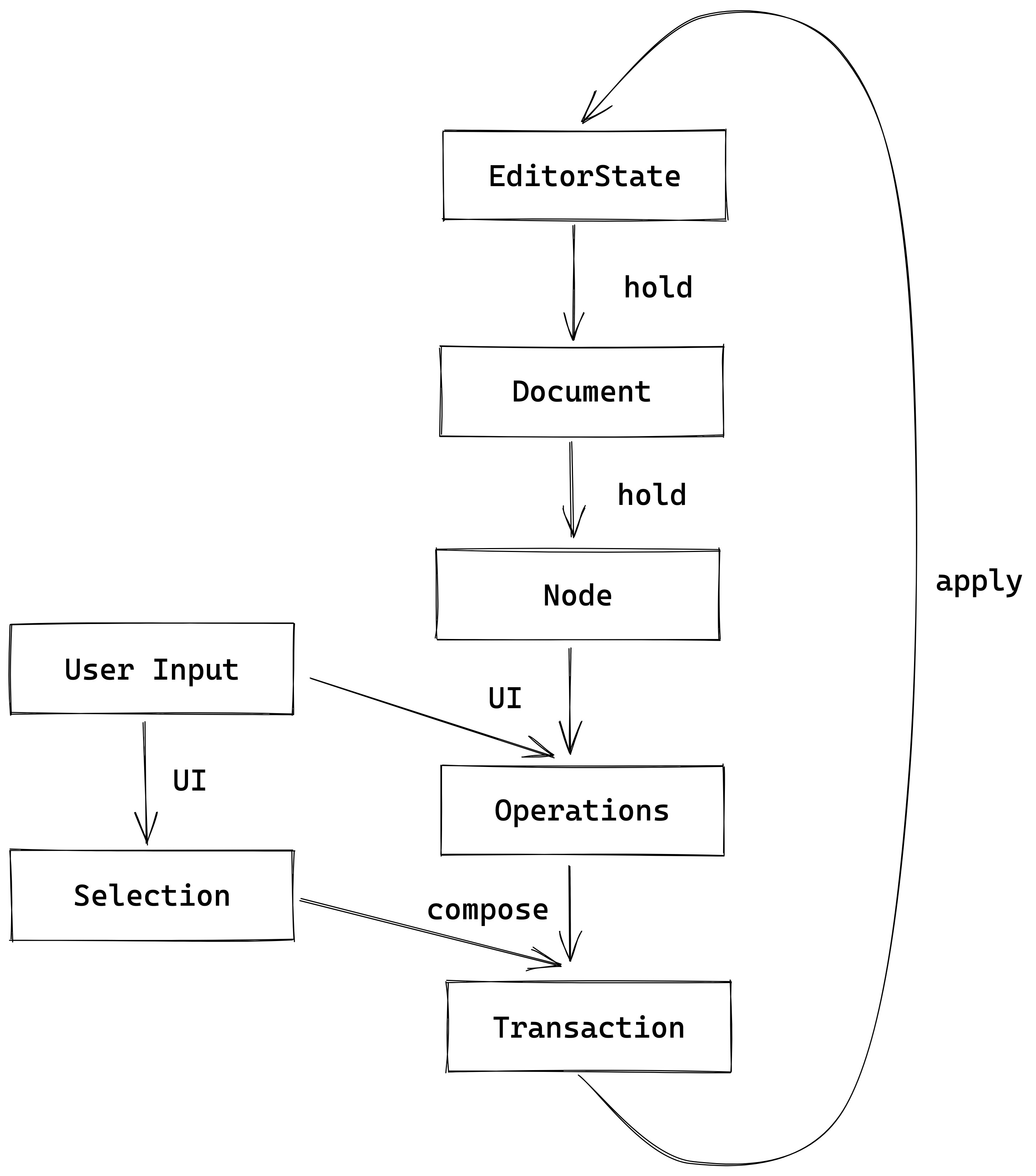 NodeWidgetBuilder is an abstract protocol, responsible for converting a Node to a Widget.

Each node owns its corresponding NodeWidgetBuilder.

Before initializing AppFlowy Editor, we need to inject the mapping relationship between Node and NodeWidgetBuilder.

When AppFlowy Editor starts to render the Nodes, it will first recursively traverse the Document.

For each Node it encounters, the editor will find the corresponding NodeWidgetBuilder from the mapping relationship according to the nodes’ type and then call the build function to generate a Widget.

Meanwhile, each NodeWidgetBuilder is bound to Node through ChangeNotifierProvider. Combined with the above-mentioned logic of Document data change, whenever the data of a certain node changes, AppFlowy Editor will notify NodeWidgetBuilder to refresh in real time.

Thanks for reading this article. Please kindly take a 1-minute survey. We would like to collect feedback and learn what interests you the most.

Last but not least, a shoutout to Eric who helps review the article.

How we built Appflowy with Flutter and Rust

AppFlowy is an open-source alternative to Notion [https://www.notion.so/], built with Flutter and Rust. For more info about
Dec 10, 2021
8 min read